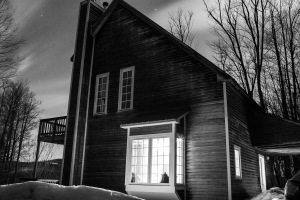 I’m writing this by starlight.

Well, okay. My laptop has a lighted screen. But above me the stars are so distinct I swear they would be enough to read by.

I’ve just arrived on a wonderfully clear day in mid-September, and in the midst of settling in, I have stopped to go out on the deck where the Adirondack chairs await some maintenance tomorrow. All the way from Boston the new moon, “God’s fingernail” as my wife likes to call it, hung low in the west, guiding me on. Above me now, the moonless sky, filled, and I mean filled, with stars. “The Milky Way” is a familiar phrase, a quaint expression really. Now and again back home, especially if I’m away from houses, I see a little suggestion of it. Here it looks like an interstellar freeway. “Milky” hardly seems an exaggeration.

Then too there are so many more stars than I see at home. I like pointing out constellations, usually to no one in particular. The dog, maybe, on our evening walk. “Look, Luna! There’s Cassiopeia!” It’s easier to see them there, because the brightest stars seem more singular, isolated and defined. Orion is right there, without competition from lesser stars. Here it’s a regular mob of stars, a stellar “Where’s Waldo” overhead. Breathtaking.

The impact of this, after the surprise and delight have diminished, is to realize that we are in fact on a small planet in a very large galaxy in an impossible to fathom universe. It’s a great way to get humble: to see stars this way. I like to think of where I am on Earth—a shoulder of North America, not “flat ground” at all, but projecting out at an angle perpendicular to Earth into this darkness filled with distant light.

The Barred Owl has just spoken. “Who-oo, oo-oot. Who-oo, oo-OOOO.” Not too far away, straight out from me in the dark. He or she is a regular here. Last year I managed a photo with my phone, capturing a distinctive owl shape, not much more. I go online to see better the features that distinguish the Barred from the Great Horned, also common in these woods, and the Barn Owl, less common but distinctive in its screeching call.

Well, I have landed. Greeted by stars and night folk. Vision and sound. How wonderful to be here.